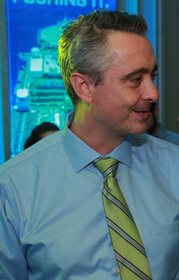 Mr. Tonnel earned a Master of Science degree in Management from HEC Paris, France in 1991.

“By optimizing our processes, streamlining our approach and putting our knowledge and data to work, we have achieved significant efficiencies, eliminated waste and found new ways to maximize the value of what we spend across our organization. While maintaining a clear focus on consistent execution, we continue to identify and implement cross-functional solutions that differentiate Transocean and make our business more efficient.”