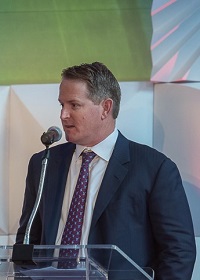 Mr. Richards began his career at Transocean in 1997 as a roustabout working offshore in the Beaufort Sea before transitioning to dynamically-positioned ultra-deepwater drillships a year later.  He worked his way up the drilling ranks, eventually moving into an onshore Rig Manager position in 2003.  Since then, Mr. Richards has served in various roles of increasing responsibility, including North America Marketing and global Operations Management.